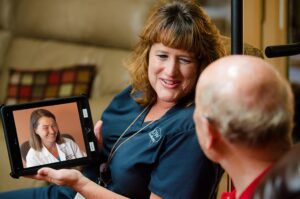 The Bob & Renee Parsons Foundation has awarded a $4 million gift to the Barrow Neurological Institute in continued support of the Muhammad Ali Parkinson Center, to establish the Lonnie and Muhammad Ali Legacy Care program. The program will allow Barrow to extend care to patients who are physically unable to travel to the center for care.

“The Champ didn’t accept anything less than the very best in his fight against Parkinson’s,” said American entrepreneur and philanthropist Bob Parsons. “This program will allow the center to give every patient the same level of personalized care that he received.”

Many Parkinson’s patients cannot receive necessary care because they have mobility complications, are homebound or reside in rural areas. Through the Lonnie and Muhammad Ali Legacy Care program, Barrow’s medical staff will be able to provide multi-disciplinary care for these patients, in their homes, and offer them the ability to communicate remotely with their physicians via video chat and telemedicine. Patients and caregivers will have access to technology that allows them to remotely participate in various lectures, trainings and support groups, ultimately providing them with tools to achieve a better quality of life. This type of program has long been the vision of Muhammad Ali’s wife, Lonnie Ali.

“Lonnie shared with us her belief that everyone engaged in the fight against this debilitating disease should get the same attention and dedication from doctors and caregivers that her husband received,” said businesswoman and philanthropist Renee Parsons. “Bob and I are honored to help advance Lonnie’s vision of helping those who need it most.”

The gift was announced during Celebrity Fight Night XXIII by Bob Parsons, a close friend of Muhammad Ali’s, and brings the Parsons’ cumulative giving total to more than $9 million in support of the center. The Lonnie and Muhammad Ali Legacy Care program extends the reach of Muhammad Ali’s legacy by dramatically changing the lives of Parkinson’s patients who would otherwise not have access to the care they need. And it will do so in a way that enables patients to maintain their dignity, independence and quality of life, reassuring them and their caregivers that they are never alone in their journey of care.

“Through the establishment of the Lonnie and Muhammad Ali Legacy Care program, Barrow will be able to provide the very best Parkinson’s care to patients who need it most,” said Katie Cobb, president of Barrow Neurological Foundation. “Barrow is committed to leading the way in advanced patient care through innovative programs such as this, and we are grateful to The Bob & Renee Parsons Foundation for helping to make it a reality.”

Parkinson’s is a progressive disorder of the nervous system that affects up to 1 million Americans. It develops gradually, sometimes starting with a barely noticeable tremor, and commonly causes stiffness and slowing of movement, eventually resulting in significant loss of mobility. The Muhammad Ali

Parkinson Center is the nation’s most comprehensive center for Parkinson’s disease and other movement disorders, and in 2017 is celebrating the 20th anniversary of its naming by Muhammad Ali. The formation of the Lonnie and Muhammad Ali Legacy Care program is one more step in the fight to change the care and treatment of Parkinson’s, and to one day beat this terrible disease. To learn more visit supportbarrow.org/MAPC.