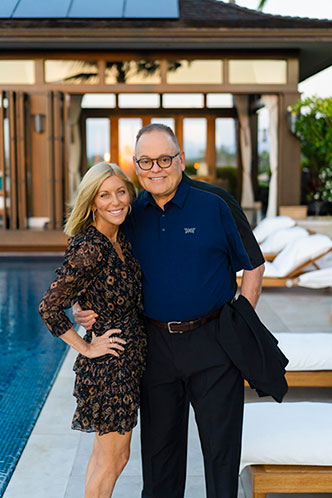 The Bob & Renee Parsons Foundation was established in February 2012 with the hope to change the lives of our country’s critically wounded veterans and to improve outcomes for individuals and families living in poverty. Founded by serial entrepreneur Bob Parsons and business executive Renee Parsons, the Foundation is guided by the couple’s personal experiences, values and beliefs.

Perhaps best-known as the founder of GoDaddy and PXG, Bob Parsons is widely recognized for his entrepreneurial ventures in the fields of golf, motorcycles, real estate, finance, marketing, innovation and philanthropy. The Bob & Renee Parsons Foundation represents the philanthropic heart for all of Parsons’ enterprises under the YAM Worldwide brand, including PXG (Parsons Xtreme Golf), Scottsdale National Golf Club, Harley-Davidson of Scottsdale, GO AZ Motorcycles, SNEAKY BIG, YAM Properties, YAM Capital and others.

It was Bob’s life before his success, however, that most impacts his philanthropy. Bob grew up “poor as a church mouse” in inner-city Baltimore. He struggled in school, failed the fifth grade and almost didn’t graduate high school. He credits his service with the U.S. Marine Corps and experience in Vietnam with transforming his life.

Renee Parsons is a leader in business, fashion and philanthropy. She is the President and Executive Creative Director of PXG Apparel, Co-Founder of The Bob & Renee Parsons Foundation and leads hospitality and design at Scottsdale National Golf Club.

Born in a small Michigan town, Renee learned the value of hard work and serving others at an early age. By 13, she was working at The Pixie, a restaurant her grandfather first opened in 1945. Setting out to make her mark in the hospitality industry, Renee earned her BA in Hospitality and Business from Central Michigan University. She spent years climbing the corporate ladder, first in Chicago and then in Scottsdale, where she joined GoDaddy, launching their GoDaddy Cares program and leading their philanthropic work worldwide.

Renee is most passionate about supporting issues surrounding women, children, and education. She is a member of Women Moving Millions, a global philanthropic community of people committed to large-scale investment in women and girls.

Believing that the work they do through their philanthropy is the most important, Bob and Renee signed the Giving Pledge in December 2013, making a public declaration to give away at least half their net worth.

The Foundation opens its doors

$2.5M in disaster relief in response to Haiti’s earthquake

$1M to provide assistance to critically ill and injured veterans

$4M toward the fight to end the HIV/AIDS epidemic

Providing Medical Care to the Poor

$2M to create a new health clinic for homeless

$1M for college scholarships to undocumented students with DACA status

$5M to create a new Leadership Center for Girls & Women

Commitment to Improving LIves of Veterans with PTSD

Double Down for Veterans

Stepping up for First Responders

$1M in support of children with life-threatening medical conditions

Paving the way for veterans to access MDMA-assisted psychotherapy