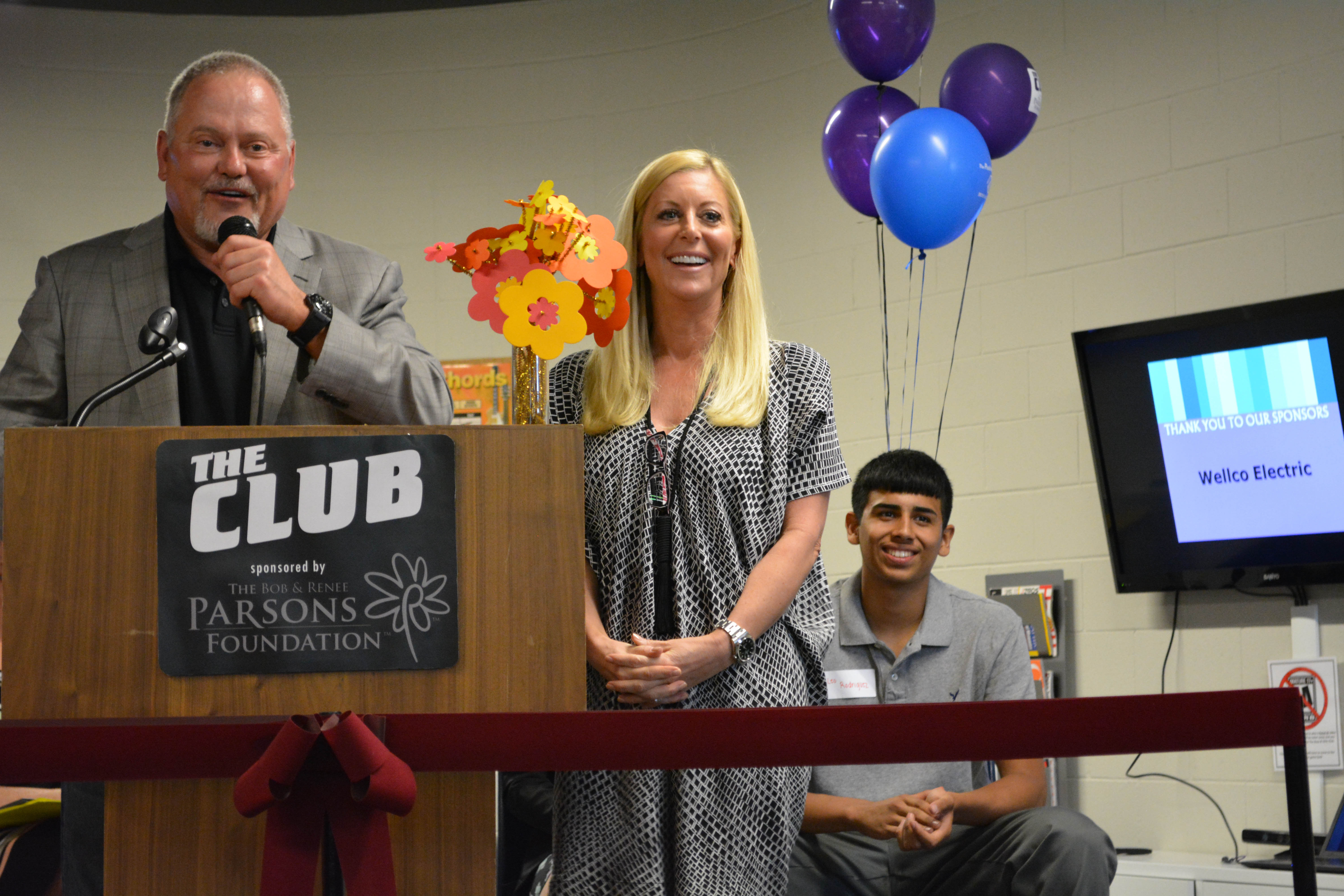 Phoenix, AZ (April 29, 2014) – The Bob and Renee Parsons Foundation donated a record-breaking $5.25 million to the Boys & Girls Clubs of Metro Phoenix in a surprise announcement on Tuesday, April 22, 2014. It is the single largest gift made by the Foundation to date and the single largest gift received by the Boys & Girls Clubs of Metro Phoenix (BGCMP) in its 67 year history. The transformational grant will enable the Clubs to continue their mission to better serve the needs of at-risk Valley children.

Bob Parsons, founder and executive chairman of Scottsdale-based GoDaddy, and his wife, Renee, made the announcement during the grand opening celebration for the new Bob & Renee Parsons Teen Center at the Spencer D. & Mary Jane Stewart Branch of the Boys & Girls Clubs of Metro Phoenix. The new Parsons Teen Center will not only provide teens in the Maryvale area with safety, meals and positive mentorship, it will also offer a range of programs including homework help, leadership development, community service, computer programming classes, guitar lessons and sports leagues.

During the celebration, Bob and Renee shared their inspiration for giving back to their community through the Boys & Girls Clubs.

“I struggled a lot as a kid; I didn’t do well in school and, as a teenager, I couldn’t quite figure out who I was, let alone who I was going to be,” said Bob Parsons during his speech. “It was in the Marine Corps that I learned the things that would make all the difference in my life. But I am certain, if I had access to the mentors, resources and safe haven that The Boys & Girls Clubs offer, my turn-around would have come much sooner.”

“Bob and I believe that every child, regardless of background or situation, is entitled to an education, good nutrition, a stress free happy environment and the hope that they too, will share in the American Dream,” added Renee Parsons. “We wholeheartedly believe that the work that is being done at Boys and Girls Clubs, each and every day, is changing lives.”

Following their moving speech, the Parsons conferred quietly between themselves before stepping forward to announce the record-breaking gift.

Initially, Renee Parsons announced that the Foundation would double its initial gift of $250,000 for the Teen Center, which will enable the branch to further enhance the facility. She also pledged one million dollars to support the operation of the 12 Boys & Girls Clubs of Metro Phoenix.

Not done yet, Bob Parsons announced a $4 million grant to found The Bob & Renee Parsons Branch of Boys & Girls Clubs of Metro Phoenix. The previously unnamed branch broke ground last month in the Balsz School District. Like most of the young people BGCMP serve, nearly all of the children in the new Club’s neighborhood live at or below the poverty line and half come from broken homes. Many children in the district are refugees from other countries and nearly 1 in 10 are homeless. The new Parsons Branch will be a sanctuary where children and teens can participate in educational and leadership programs, as well as build healthy relationships with adults and peers.

“Bob and Renee Parsons are true heroes for our community’s children. Their generous spirit and compassion will provide safety, smiles and opportunity to thousands of children who need us most. Thanks to The Bob and Renee Parsons Foundation, generations of children will have the opportunity to stay safe and healthy, succeed in school, make smart choices and achieve their dreams.”

Since 1946, the Boys & Girls Clubs of Metro Phoenix has empowered young people in Phoenix and the West Valley to reach their full potential as caring, productive, responsible citizens. Nearly 23,000 children and teens count on 12 clubhouses after school and during the summer for safety, hot meals, positive friends and countless opportunities to be great.

If you want to help vulnerable children in the Valley reach their full potential, visit www.bgcmp.org.

About Boys & Girls Clubs of Metro Phoenix
Since 1946, the Boys & Girls Clubs of Metro Phoenix has empowered all youth—especially those who need us most – to reach their full potential as caring, productive, responsible citizens. Each year, 23,000 youth benefit from our life-changing programs and services at 12 Clubhouses, outreach programs in local schools,and Dental Clinic. Visit www.bgcmp.org for more information.