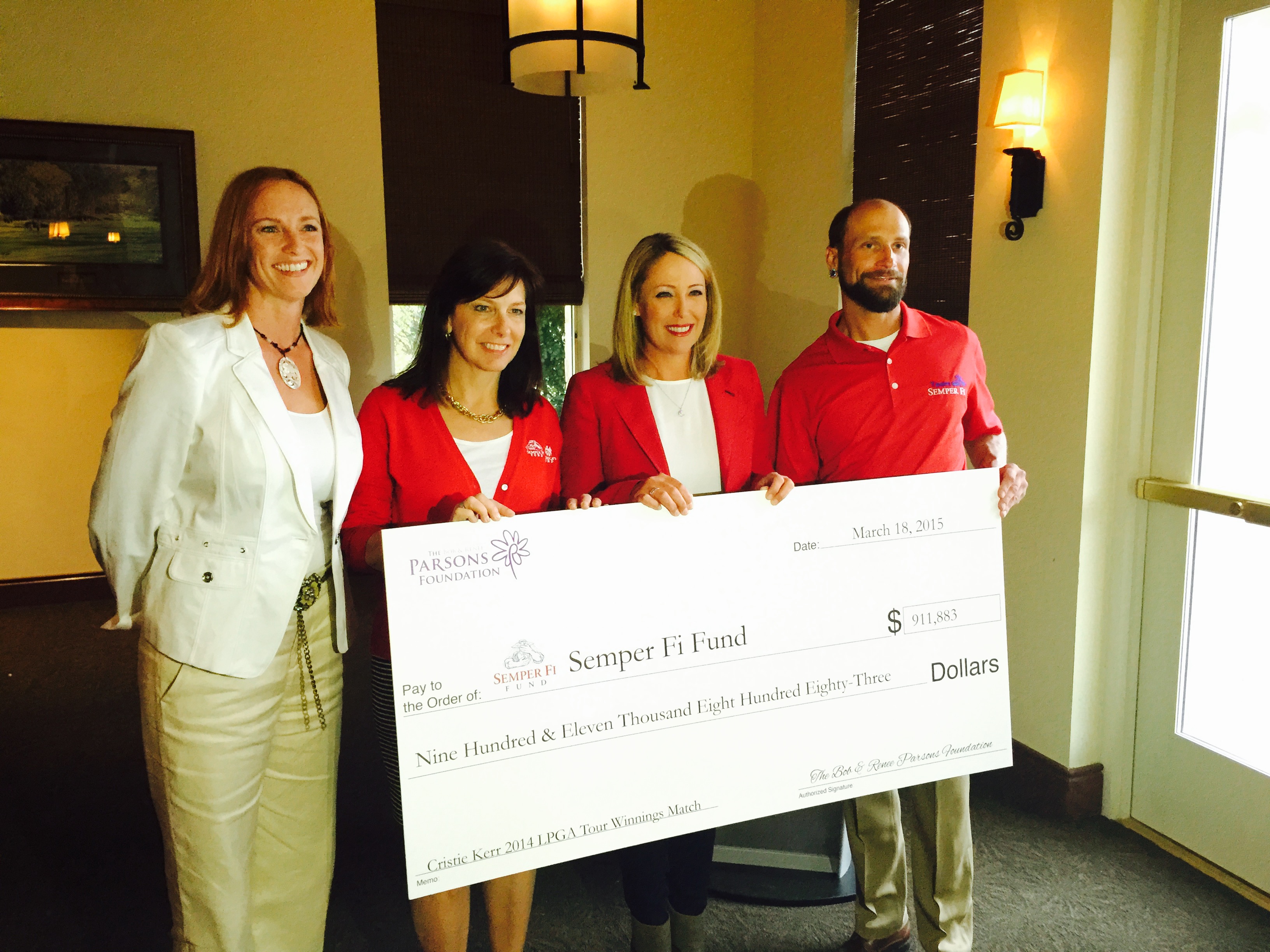 PHOENIX, AZ (March 19, 2015) – Yesterday, a very special check presentation was made to highlight the fundraising partnership of Champion Golfer Cristie Kerr and The Bob and Renee Parsons Foundation in support of the Semper Fi Fund. Last spring at the LPGA Founder’s Cup in Phoenix, AZ, it was announced that The Bob & Renee Parsons Foundation would match 100 percent of Kerr’s 2014 LPGA Tour winnings, dollar-for-dollar, as a donation to help wounded, critically ill and injured service members and their families. To honor this commitment and help raise awareness, Kerr proudly displayed the Semper Fi Fund logo on her bag for the 2014 season.

Over the course of 24 events during the 2014 season, Kerr accumulated an impressive $911,883 in official money, nearly $40,000 per event entered. From Hawaii to New Jersey, Semper Fi Fund beneficiaries cheered on Kerr from outside the ropes in their distinctive red Semper Fi Fund golf shirts.

This initiative is one of many ways The Bob & Renee Parsons Foundation helps raise awareness and gives back to service members. With contributions in excess of $12 million, their support of the Semper Fi Fund has touched the lives of thousands.

“Our veterans, from each and every branch of the military, deserve to come home to a support system that reflects how much we appreciate and respect the sacrifice they have made for our country,” said businessman and philanthropist Bob Parsons. “Through this partnership with Cristie, I believe we have helped raise critical awareness and support for the great work Semper Fi Fund is doing each and every day for our country’s wounded warriors.”

Kerr has throughout her career been an ardent supporter of various charitable efforts. Introduced to the Semper Fi Fund by Bob Parsons in 2013, Kerr, the daughter of a Vietnam veteran, was eager to get involved.

“I have been blessed that my career as a professional golfer has now given me the opportunity to give back to two causes that are very close to my heart,” said LPGA star Cristie Kerr. “I started Birdies for Breast Cancer in 2003 after my mother was diagnosed with the disease to help raise money and awareness for breast cancer research and treatment. Ten years later, the Semper Fi Fund has given me the opportunity to help raise financial aid for injured and critically ill members of the U.S. Armed Forces and in so doing, allow me to pay tribute to my father for his service to this country.”

“Cristie has been a champion for the Semper Fi Fund,” Renee Parsons added. “This partnership has been so successful because she truly understands how important the Semper Fi Fund is to the men and women it serves. Bob and I are thrilled to match her 2014 tour winnings and hope that this partnership will inspire others to find creative ways to support the causes they believe in.”

“We’re incredibly thankful to The Bob & Renee Parsons Foundation and Cristie Kerr for their support and generosity,” said Karen Guenther, Semper Fi Fund founder and CEO. “At Semper Fi Fund, the idea of ‘recovery through sport’ drives many of our programs and events – so what a fitting way to raise funds and support for our service members in need.”