Fighting to Reject the Norms in Patient Care. 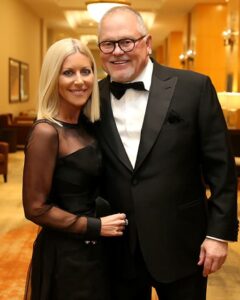 The Bob & Renee Parsons Foundation recently announced a $4 million gift to Barrow Neurological Foundation, in continued support of the Muhammad Ali Parkinson Center (MAPC), to establish the Ali Legacy Care program. The gift underscores the Parsons’ commitment to improving care for patients treated at the center, as well as advancing research and education to benefit the medical community worldwide.

“The Champ didn’t accept anything less than the very best in his fight against Parkinson’s,” said American entrepreneur and philanthropist, Bob Parsons. “This program will allow the Center to give every patient the same level of personalized care that he received.”

Through the Ali Legacy Care program, the dedicated medical staff at the MAPC will be able to provide a new level of support to those they serve. This includes multi-disciplinary care in their home and the ability to communicate remotely with their physicians via video and telemedicine. Extending the care the Center provides into one’s home has long been the vision of Muhammed Ali’s wife, Lonnie Ali.

“Lonnie shared with us her hope that everyone engaged in the fight against this debilitating disease should get the same attention and dedication from doctors and caregivers that her husband received,” said businesswoman and philanthropist, Renee Parsons. “Bob and I are honored to help advance Lonnie’s vision of helping those who need it most.”

Parkinson’s is a progressive disorder of the nervous system that affects movement. It develops gradually, sometimes starting with a barely noticeable tremor in just one hand. But while a tremor may be the most well-known sign of Parkinson’s, the disorder commonly causes stiffness and slowing of movement. It is estimated that up to 1 million Americans are affected with Parkinson’s and approximately 60,000 new cases are diagnosed each year. One out of every 100 people over the age of 60 is affected. Parkinson’s eventually results in significant loss of mobility and the inability to travel outside the home.

The transformational $4 million gift was announced personally during Celebrity Fight Night XXIII by Ali’s close friend, Bob Parsons, and brings the Parsons’ cumulative total to more than $9 million in support of MAPC. Established in 1997 by Muhammad Ali with founding director Abraham Lieberman, MD, and support from Celebrity Fight Night, MAPC is the nation’s most comprehensive center for Parkinson’s disease and other movement disorders. The Parsons have worked closely with Dr. Lieberman in recent years to advance the care of those struggling with Parkinson’s, and the formation of the Ali Legacy Care program is one more step in the battle to beat this terrible disease.