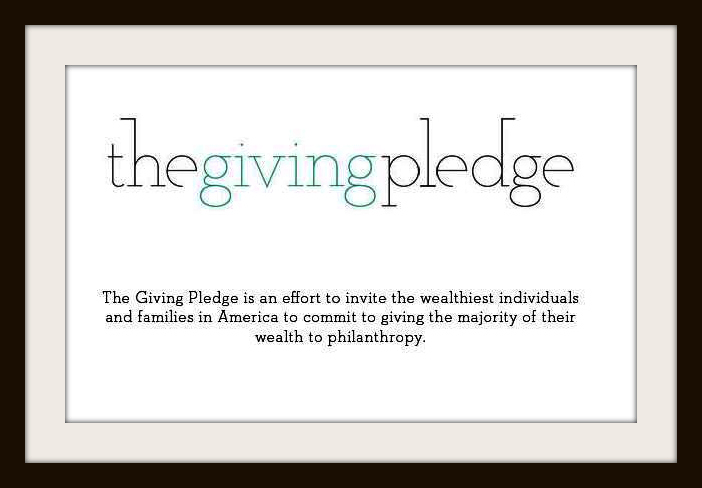 SEATTLE – Dec. 10, 2013 – Seven more wealthy families and individuals are joining the Giving Pledge by committing to give half or more of their wealth to charity. Now in its fourth year and totaling 122 signatories, the Giving Pledge is a long-term, global initiative created by Warren Buffett and Bill and Melinda Gates that aims to inspire deeper engagement in philanthropy and increase charitable giving globally.

“In this season of giving, we are inspired by the millions of people across the globe who give what they can in meaningful and significant ways,” said Melinda Gates, pledge co-founder and co-chair of the Bill & Melinda Gates Foundation. “The Giving Pledge is rooted in this spirit and hopes to inspire people to tackle problems that are inherently difficult and diverse in an effort to address the pressing social issues they care about most.”

About the Giving Pledge
The Giving Pledge is an effort to invite the world’s wealthiest individuals and families to commit half of their wealth to philanthropic causes and charitable organizations of their choice.

The 122 pledgers range in age from 27 to 98. Globally, signatories represent 12 separate countries. In the United States, they are from 25 states and the District of Columbia, with the largest contingents from California and New York. Pledgers give to a wide variety of causes, such as education, health, medical research, social services and the environment. The pledgers are at different stages in their philanthropy — some have already given away the majority of their wealth, while some are just getting started. But they have all committed to give half their wealth, with at least 40 pledging even more in their Giving Pledge letters.

The Giving Pledge encourages open conversation about philanthropy and does not involve direct appeals, pooling money, or requirements to support a particular cause or organization. Pledge signatories come together throughout the year to discuss challenges, successes and failures, as well as how to be smarter about giving.

Although the Giving Pledge is specifically focused on billionaires, it is inspired by past and present efforts that encourage and recognize givers of all financial means and backgrounds. The inspiration is the example set by millions of people who give generously (and often at great personal sacrifice) to make the world a better place.

For the full list of pledgers and personal letters by many of these pledgers outlining their commitment to give, visit www.givingpledge.org.

Beth and Seth Klarman
Beth Klarman is president of The Klarman Family Foundation. She serves on the board of directors of the Jewish Funders Network and From the Top, in addition to being a member of the Youth Villages Massachusetts board. Beth serves on the board of Trustees of Facing History and Ourselves and is the founder and former co-chair of the Boston Jewish Community Women’s Fund. She is a member of the McLean Hospital National Council and a graduate of New York University’s School of Social Work.

Seth Klarman is president and CEO of The Baupost Group, LLC, a value-oriented, open-mandate investment organization founded in 1982. He is the author of “Margin of Safety: Risk Averse Investing Strategies for the Thoughtful Investor” and a member of the board of directors of the Broad Institute and Facing History and Ourselves. He received his bachelor’s degree from Cornell University and his MBA from Harvard Business School.

Through the Klarman Family Foundation, Beth and Seth work to advance medical and scientific research with a particular interest in behavioral health; build a vibrant, engaged and inclusive Jewish community that feels connected to and supportive of Israel; and strengthen their local community, with a current strategic focus on increasing access to music education.

Liz and Eric Lefkofsky
Liz Lefkofsky is the director of the Lefkofsky Family Foundation, a trust established in 2006 for the purpose of advancing high-impact programs, initiatives and research that enhance the quality of human life in the communities we serve. Liz is also the founder of an organization focused on helping individuals in times of need. Before establishing the foundation, she worked for a variety of nonprofit organizations including Gallery 37, the Near South Planning Board, Printers Row Lit Fest and the American Brain Tumor Association.

Liz is currently on the board of several organizations, including Teach for America Chicago, Young Woman’s Leadership Charter School, Museum of Contemporary Art, Ravinia Festival and Human Rights Watch.

Richard Edwin and Nancy Peery Marriott
Richard Edwin Marriott is chairman of the Board of Directors of Host Hotels & Resorts, which is among the largest owners of lodging properties in the world. Marriott also serves as chairman of First Media Corporation, an independent broadcasting firm.

Marriott graduated from the University of Utah and holds an MBA from Harvard Business School. The younger of the two sons of company founders J. Willard and Alice S. Marriott, Marriott was born in Washington, D.C. He resides with his wife Nancy in Potomac, Maryland. They have four daughters, Julie, Sandy, Karen, and Mary Alice, and 13 grandchildren.

Nancy Peery Marriott has been active in religious, community and civic activities, particularly the American Red Cross, and serves on the Board of First Media Corporation. Originally from Palo Alto, California, she received a Bachelor of Science degree from the University of Utah and has completed additional studies at the Longy School of Music and the University of Maryland School of Music. A trained lyric soprano, she has appeared extensively in concert, oratorio and recital at the Kennedy Center for the Arts, the Boston Symphony Hall and as soloist with the Mormon Tabernacle choir and throughout the United States. Her greatest accomplishment has been to raise four daughters who are healthy, well-rounded, and contributing members of their church and community.

Yuri Milner
Yuri founded Mail.ru Group in 1999. Under his leadership, Mail.ru Group became the leading European Internet company. Yuri took that business public in 2010, stepping down from his role as Chairman at the beginning of 2012 to focus his efforts on global Internet investments. DST Global, a family of funds investing in Internet companies, was established in 2009 and is one of the largest Internet investors in the world.

Yuri graduated from Moscow State University in 1985 with an advanced degree in theoretical physics and subsequently conducted research at the Institute of Physics at the Russian Academy of Sciences. In 2012 he launched the Fundamental Physics Prize, dedicated to advancing knowledge of the Universe at the deepest level, as well as communicating the excitement of fundamental physics to the public. In February 2013, together with Art Levinson, Sergey Brin and Anne Wojcicki, and Mark Zuckerberg and Priscilla Chan, Yuri and Julia Milner launched the Breakthrough Prize in Life Sciences, recognizing excellence in research aimed at curing intractable diseases and extending human life. Both prizes are the largest scientific awards in the world.

Bob grew up in Baltimore. He joined the U.S. Marine Corps and served in Vietnam, where he was awarded the Combat Action Ribbon, Vietnamese Cross of Gallantry and Purple Heart Medal.

A Michigan native, Renee is an accomplished business woman who began her career in hospitality sales.  In 2009 she joined GoDaddy as their corporate events planner. In 2010 she took on the role of VP of Events & Community Outreach heading up GoDaddy Cares, the philanthropic arm for the corporation.

Outside of enterprise and education, both of which he has supported financially through generous donations, bursaries and grants, Dr. Tahir is also an avid sportsman: He is a sixth dan black-belt Karate master and a fifth dan Judoka.

Hansjörg Wyss
Hansjörg Wyss is the Chairman Emeritus of Synthes, Inc., a pioneering company that he joined in 1977 and helped grow into a global leader that revolutionized the medical device industry and the treatment and healing of traumatic injuries. The company was sold to Johnson & Johnson in 2012.  Mr. Wyss’s philanthropy aims to foster new ideas, new tools, and new collaborations in areas ranging from basic research, medicine, and the arts to economic opportunity, conflict resolution, and land conservation.  A native of Switzerland who now lives in Wilson, Wyoming, Wyss has helped found several philanthropic organizations, including the Wyss Foundation, PeaceNexus, the AO Foundation, and the Wyss Institute at Harvard.

Beth and Seth Klarman
“One key observation is that society’s problems seem to be compounding as fast or faster than wealth can compound, suggesting a greater urgency to current funding.  And when we make charitable gifts, we almost always feel richer, not poorer, for having been given the opportunity to help.”

Liz and Eric Lefkofsky
“We recognize that perhaps our greatest accomplishment—with the exception of the kids we raise–will not come from businesses we’ve started, but from the help we provide to people and causes  around the world.  We believe, with the others who have signed this Pledge that we are truly on the cusp of life-changing achievements that will improve our collective quality of life, and have an everlasting impact on generations to come.”

Richard Edwin and Nancy Peery Marriott
“Down through the years we have always supported the schools that have educated and trained us, the institutions that have helped us live healthy lives, and the communities that have supported us in our business endeavors.  We will continue to do so during our lives and pledge that the bulk of our estate will go to a charitable foundation that will be run by our four very capable daughters who are already heavily involved in supporting their own communities. They are the greatest blessings of our lives and we are thrilled that they will be able to help bless the lives of future generations.”

Yuri Milner
“The Giving Pledge encourages more than investing in problem solving. It brings something approaching the scientific method to philanthropy. This means not just giving, but trying to learn from real-world experience and experiment in order to give effectively. This is a sure sign of progress: we are finding more answers, and we are getting better at asking the right questions.”

Bob Parsons
“Renee and I have always believed every child has the right to good nutrition, the best medical care, a good education, a happy and stress free environment and the hope that they too will share in the American Dream. We’ve dedicated our foundation and our resources to helping make this happen. It makes sense we join The Giving Pledge.”

Dato’ Sri DR Tahir
“I don’t for a minute take for granted the many blessings I have received, and in the Christian spirit of it being more blessed to give than to receive, feel compelled to give back as generously as I have received.”

Hansjörg Wyss
“President Thomas Jefferson reminds us: ‘There is a debt of service due from every man to his country proportioned to the bounties which nature and fortune have measured to him.’ I have been fortunate to benefit from the opportunities endowed by this nation, its land, and our world.  I am determined to fill my duty to others so we may always expand the reach of human possibility and compassion.”