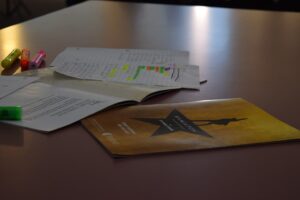 2,700 Students and Teachers Will Attend Performance at ASU Gammage

The innovative educational program that debuted at HAMILTON on Broadway will continue in Tempe on Friday, February 23 when 2,700 students and teachers from Arizona high schools attend the matinee performance of the musical at ASU Gammage.

The February 23 all-student matinee performance in Tempe will provide more than 2,700 Arizona high school students the opportunity to experience the musical HAMILTON after having spent several weeks in their classrooms studying American history through a special integrated curriculum about Alexander Hamilton and the nation’s Founding Fathers.

In addition to seeing a performance of HAMILTON, students will participate in a Q&A with members of the HAMILTON cast.  As well, students representing various schools in attendance will perform an original work they created based on their classroom studies – songs, rap, poetry, scenes, monologues – on the ASU Gammage stage in front of their peers.

The Hamilton Education Program is one of several history education programs at the Gilder Lehrman Institute of American History. Its president, James G. Basker — who devised the education program in New York in tandem with HAMILTON creator Lin-Manuel Miranda, producer Jeffrey Seller, The Rockefeller Foundation and the NYC Department of Education — adds, “This project is transformative. HAMILTON has struck a chord with our nation’s students because it embodies what great history education is all about: bringing the past to life, and fostering connections with the exceptional individuals and moments that have made us who we are. This program empowers students to reclaim their own narrative and empowers teachers to bridge classroom learning with the stage.”

HAMILTON producer Jeffrey Seller, who was instrumental in developing the HAMILTON Education Program, says about the program in Tempe, “Our goal is to ensure that students have a shot to see HAMILTON and use its words, music and staging to further their understanding and enjoyment of American History, music and drama. We’ve had the pleasure of expanding the education program outside of New York in Los Angeles, Chicago and other cities around the country.”

Dr. Rajiv Shah, President of The Rockefeller Foundation said “After the initial success of the partnership in New York City we could not throw away our shot to ensure students across the United States had the opportunity to witness living breathing history. We look forward to seeing the creativity and engagement this program continues to spur.”

The HAMILTON producers are making tickets for this educational partnership available for $70, $60 of which is subsidized by The Bob & Renee Parsons Foundation and the Abbett Family Foundation.  Tickets will cost $10 for each student.

The Rockefeller Foundation provided an initial grant of $1.46 million that funded the educational partnership in New York City.  After the resounding success of the partnership in New York, The Rockefeller Foundation committed an additional $6 million to the effort to support the national expansion of the program.  The Rockefeller Foundation has a long history of supporting the arts and humanities, fueled by a belief that the cultivation of aesthetic sensibilities through literature, music and other fine arts is essential to the well-being of humanity.  The HAMILTON Education Program underscores the Foundation’s commitment to nurturing the vitality of American cultural institutions and the role of the arts as a catalyst for social change.

HAMILTON is the story of America’s Founding Father Alexander Hamilton, an immigrant from the West Indies who became George Washington’s right-hand man during the Revolutionary War and was the new nation’s first Treasury Secretary.  Featuring a score that blends hip-hop, jazz, blues, rap, R&B, and Broadway, HAMILTON is the story of America then, as told by America now.

With book, music and lyrics by Lin-Manuel Miranda, direction by Thomas Kail, choreography by Andy Blankenbuehler and musical supervision and orchestrations by Alex Lacamoire, HAMILTON is based on Ron Chernow’s biography of Founding Father Alexander Hamilton.

The HAMILTON creative team previously collaborated on the 2008 Tony Award ® Winning Best Musical In the Heights.

The musical is produced by Jeffrey Seller, Sander Jacobs, Jill Furman and The Public Theater.