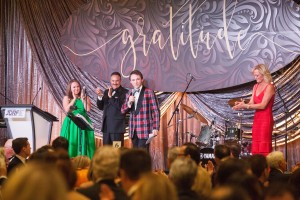 JDRF’s Desert Southwest Chapter raised more than $1.7 million at its annual Promise Ball Gala in November, helping fund a cure for Type 1 diabetes. Nearly 700 society and industry leaders from across the Valley attended the November 12 Promise Ball, one of Arizona’s largest fundraising galas. In a surprise announcement, Bob and Renee Parsons pledged to match every dollar raised during the evening’s live auction, resulting in a nearly $500,000 contribution from The Bob and Renee Parsons Foundation.

“We are beyond thrilled at the success this event has achieved year after year,” said JDRF Executive Director Paula Boca-Bommarito. “Because of the outpouring of support from our community and generous sponsors we are able to continue to raise vital funds and educate people on what it’s like to live with type 1 diabetes.”

The sold-out, black-tie fundraiser, which was themed “An Evening of Gratitude,” was held at the Omni Scottsdale Resort & Spa at Montelucia and included live and silent auctions, dancing and entertainment. The event is a celebration of the progress JDRF is making and a chance for guests to support ongoing life-changing therapies that positively impact millions living with Type 1 diabetes.

“We were so impressed by how JDRF is working toward a much-needed cure, while at the same time helping to lift the stigma this disease can place on young people by educating others about type 1 diabetes,” said businesswoman and philanthropist, Renee Parsons. “The organization supports not just the body, but the person as a whole, and we are proud to assist in this important mission.”

This year’s event honored the Volk Family for being champions of the cause and their ongoing commitment to supporting the JDRF Desert Southwest Chapter. Hollis Volk, whose son Chambers is a type 1 diabetic, was this year’s gala chair and was joined at the event by her husband Chris and daughter Emma. In addition to Bob and Renee Parsons, other notable guests and organizations represented at the gala included local TV personality Mark Curtis (the evening’s master of ceremonies), Mark and Jean Koloseike, Oaktree Capital, Goldman Sachs, Inc. and STORE Capital.

Since 2009, the Desert Southwest Chapter has raised $8,857,055 through its fundraising galas, which directly goes to research and programs for type 1 diabetes in Arizona and nationwide. According to JDRF, there are more than 532,600 people in Arizona with diabetes and approximately 1.25 million nationwide suffer from type 1 diabetes.