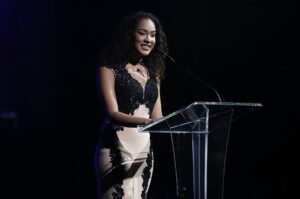 Highlights from the event:

The night also included a celebration of 13 Club Youth of the Year candidates who have been on a 16-week journey of team building, relationship and leadership development, presentation skills and Toastmasters training.

The Warner A. Gabel Branch’s Arianna Williams ultimately took home the title of “BGCMP Youth of the Year.” A victim of bullying, Williams found a second home at the Gabel Branch where she became a part of the Leaders in Training volunteer program and used her love of theater to create a broadcasting club program called Lights, Camera, Teens! Williams, a senior at Mountain Pointe High School, has been accepted into New York University and recently auditioned at the Tisch School of the Arts. “My Club recognized how hard I worked academically and in my extracurricular activities,” she says. “Because of that support, I’m able to pursue my dream of going to college to study journalism and theater.”

According to a 2014 study performed by the Boys & Girls Clubs of America, cases of juvenile crime nearly double between the hours of 3 p.m. and 7 p m. “Each day, thousands of youth in Phoenix area are coming home to an empty house,” says Amy Gibbons, president and executive director of BGCMP. “Our Clubs provide a safe haven after school by offering nutritious snacks and meals, equipment and activities to stay fit, and life-changing leadership and educational programs. And with even more youth and teens coming through our doors, the proceeds raised from our Stars event are critical to keeping our Clubs available to youth and teens just like Arianna.”

The event also honored Bob and Renee Parsons of The Bob & Renee Parsons Foundation, the night’s Champions of Giving. During the evening, the Parsons generously matched the $411,000 raised from the “Sponsor-A-Youth” direct support program, allowing BGCMP to maintain its after-school and summer day camp services in the Valley’s most dangerous and deserving neighborhoods. In addition, the Parsons surprised each Youth of the Year with a $20,000 college scholarship.

About the Boys & Girls Clubs of Metro Phoenix

The Boys & Girls Clubs of Metro Phoenix provides after-school and summer programs in some of the Valley’s most deserving neighborhoods. Our programs focus on four key areas: Academic Success, Healthy Choices, Be Great-Do Good and Fun with a Purpose, providing youth with the tools they need to enjoy childhood and become successful adults. Every year, thousands of children and teens benefit from programs through our 13 clubhouses, outreach services in the community and children’s dental clinic. For more information about the Boys & Girls Clubs of Metro Phoenix, Like us on Facebook at https://www.facebook.com/BGCMP, follow us on Twitter @bgcmp or visit www.bgcmp.org.