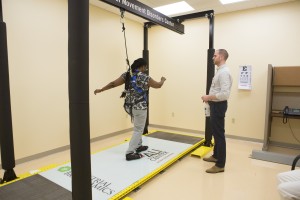 The Bob & Renee Parsons Foundation recently gifted $1 million to Barrow Neurological Foundation in continued support of the Muhammad Ali Parkinson Center—the nation’s most comprehensive center for Parkinson’s disease and other movement disorders. The gift underscores The Foundation’s commitment to improving care for patients treated at the Phoenix facility, as well as advancing research and education to benefit the medical community worldwide.

The recent gift, announced at Celebrity Fight Night XXII in April, brings The Foundation’s cumulative total to more than $5 million in support of the Muhammad Ali Parkinson Center at Barrow Neurological Institute.

The center was established in 1997 by Muhammad Ali with founding director Abraham Lieberman, MD, and support from Celebrity Fight Night. The Parsons have worked closely with Dr. Lieberman in recent years to transform the future of Parkinson’s and movement disorders, establishing The Bob & Renee Parsons Fall Prevention Center at Barrow through an initial $1 million grant in 2014.

Housed at the Muhammad Ali Parkinson Center, the Fall Prevention Center was created to address a major problem for patients with Parkinson’s disease and for all aging Americans. At least one-third of adults 65 and older fall at least once a year, making falls the leading cause of injury-related deaths and the most common cause of hospitalization among this segment of the U.S. population.

“Ultimately it is our hope that the talented team at the Fall Prevention Center will be able to determine the root cause for falls and help to reduce or eliminate the risk for those affected by this disease,” said entrepreneur and philanthropist Bob Parsons.

Additionally, the foundation has made another landmark commitment to the Muhammad Ali Parkinson Center by establishing the Bob & Renee Parsons Chair in Par­kinson’s Disease & Movement Disorders, ensuring that the most visible and important position at the center will continue to be held by distinguished and talented leader-researchers.

The chair was recently awarded to Dr. Shill as director of the Muhammad Ali Parkinson’s Center. Dr. Shill has more than two decades of experience in medical research and care, having completed a neurology residency and a movement disorders fellowship at Barrow in the late 1990s, followed by three years as a clinical fellow in the Human Motor Control Section at the National Institutes of Health. Prior to returning to Barrow, she was treating patients in the West Valley and conducting research to identify risk factors and new treatments for Parkinson’s.

“The industry is on the cusp of major breakthroughs and I want to be sure that our center is helping to lead those accomplishments,” said Dr. Shill. “The support of the Parsons—and others in the community—is critical in achieving that goal.”