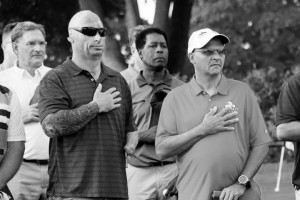 For the fifth year in a row, The Bob & Renee Parsons Foundation and GoDaddy are joining the Semper Fi Fund in its mission to raise funds to assist wounded, critically ill and injured post-9/11 service members and their families. Through December 31, 2016, The Bob & Renee Parsons Foundation will match all donations, up to $10 million, as part of the Double Down for Veterans campaign.

“The work being done by Semper Fi Fund is providing ongoing, critical support for our country’s veterans,” said American entrepreneur and philanthropist, Bob Parsons. “We have a duty to do whatever we can to give back to the men and women who have sacrificed so much in their service to our great nation.”

Parsons is a U.S. Marine Corps Vietnam veteran and recipient of the Purple Heart, Combat Action Ribbon and the Vietnamese Cross of Gallantry. The Bob & Renee Parsons Foundation has matched donations to Semper Fi Fund since 2012, and the $10 million match would bring The Foundation’s cumulative total to more than $31 million in donations to The Fund.

“Bob and Renee Parsons have taken their incredible generosity to a whole new level with the Double Down for Veterans campaign,” said Semper Fi Fund President, Executive Director and Founder Karen Guenther. “Their work goes far beyond helping us serve those who have served us all—they are doubling the impact of every single donor who joins us in supporting those who have sacrificed so much on our behalf.”

The Semper Fi Fund provides urgently needed resources and lifetime support for wounded, critically ill and injured members of the U.S. Armed Forces and their families by providing financial aid, arranging transportation for hospital visits and offering assistance every day to provide for the needs of military families. To date, The Fund has provided more than $133 million in assistance to 17,000 service members, to ensure they have the resources needed during recovery and transition back to their communities.

“Supporting the men and women who have made such incredible personal sacrifices to serve our country is something Bob and I are very passionate about,” said businesswoman and philanthropist Renee Parsons. “Every donation to Semper Fi Fund has the power to make the lives of our wounded veterans and their families a little easier, and we hope many others will join us in the Double Down for Veterans campaign.”

GoDaddy is ‘all in’ with the campaign, leading the way with a $50,000 donation. Bob Parsons, who has long been recognized for his philanthropic and entrepreneurial leadership, is the GoDaddy founder who instilled charitable giving as a priority at the company. This year, as part of a separate initiative, GoDaddy also pledged to hire a minimum of 500 veterans, or spouses, over the next five years.

“We respect and support veterans, and their families, for their dedication and sacrifice,” said GoDaddy Chief Operating Officer Scott Wagner, who is also executive sponsor for the company’s internal veterans’ employee resource group. “We appreciate military service members, past and present, who are mission-focused, service-minded and committed – all qualities we value in our GoDaddy culture. With this year’s Double Down campaign, every Semper Fi Fund donation, up to $10 million, is matched dollar-for-dollar, which we hope inspires more people to give.”

Donations to the Double Down for Veterans campaign can be made at semperfifund.org/match. Follow the progress of the campaign and learn more about those befitting from the work of the organization on Semper Fi’s social channels: Facebook.com/semperfifund and twitter.com/semperfifund.