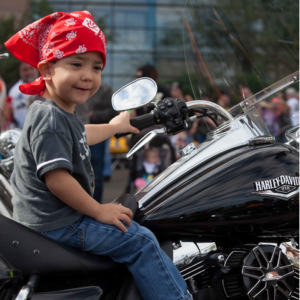 Bikers, bike enthusiasts and music lovers gathered together at the 4th Annual Bob’s Biker Blast on Saturday, November 7. This year’s event coincided with the grand opening of Parsons’ new Harley-Davidson of Scottsdale. The 150,000 square-foot facility is the largest Harley dealership in the world. This year, Bob Parsons took the stage and pledged that The Bob & Renee Parsons Foundation would round out funds raised to make the 4th Annual Bob’s Biker Blast a $1 million event.

“Once again, Bob and Renee Parsons went above and beyond for our patients and families, and we’re so grateful for their overwhelming generosity,” said Steve Schnall, Phoenix Children’s Hospital’s Senior Vice President and Chief Development Officer. “They put their heart and soul into helping others, and this event is an amazing example of so many in our community rallying behind our kids. But behind it all, the Parsons’ make it happen, they always go a step further. It’s incredible.”

Bob’s Biker Blast celebrates the diversity within motorcycling and the positive impact bikers have on our community. The annual event began again this year with more than 500 riders participating in the “I Ride for PCH” kick-off. Later that evening the Doobie Brothers with Michael McDonald performed before a crowd of 10,000.

Citing their commitment to philanthropy and community support, the Governor of the State of Arizona along with the Mayors of Phoenix and Scottsdale proclaimed November 7, 2015 “Bob and Renee Parsons Day.” The proclamations commemorate the 4th Annual Bob’s Biker Blast and the grand opening of the new Harley-Davidson of Scottsdale.

“Bob’s Biker Blast is an epic celebration of motorcycling and the riding community, but it’s also about helping those in need,” said entrepreneur and philanthropist, Bob Parsons. “Renee and I believe that every child deserves access to outstanding medical care, and Phoenix Children’s Hospital provides the absolute best in terms of staff, quality care and pediatric specialties.”

Last year’s event raised more than $63,000 before The Bob & Renee Parsons Foundation matched the results – times five –bringing the total donation to nearly $380,000. With the $1 million gift, this year’s Bob’s Biker Blast broke a PCH record for most funds raised during an event hosted by an outside organization. To learn more about Phoenix Children’s Hospital, visit: http://www.phoenixchildrens.org/