The Bob & Renee Parsons Foundation Donates $1M to The National Museum of The Marine Corps. 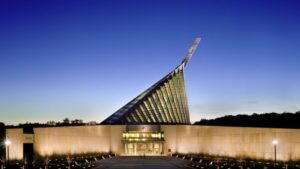 During a special dedication ceremony on April 28, 2016, The Bob & Renee Parsons Foundation presented an unexpected $1 million gift to the Marine Corps Heritage Foundation. The donation will help fund the final phase of the National Museum of the Marine Corps’ construction, which is scheduled to finish in 2017.

“It is vitally important to remember and honor the men and women who have served and the sacrifices they make to defend our great country,” said Parsons, who received the Purple Heart, Combat Action Ribbon and the Vietnamese Cross of Gallantry for his service. “Everything that I’ve ever accomplished, I owe to the Corps. Being a Marine made me who I am today.”

The Bob & Renee Parsons Foundation first supported the Marine Corps Heritage Foundation with a gift designated for the installation of a booby trap exhibit in the Vietnam Gallery. During the exhibit’s official dedication ceremony, Parsons honored his squad leader, Cpl Albert “Barry” George, who was both humbled and surprised by the recognition. While serving in Vietnam, Cpl George’s squad was instrumental in eliminating 14 enemy soldiers, capturing one soldier and large quantities of enemy supplies and equipment with no loss to their unit. Because of his leadership and actions, Cpl George was awarded the Bronze Star Medal with combat “V” for heroic valor and combat.

“We are proud and incredibly grateful to accept this generous donation from The Bob & Renee Parsons Foundation, which helps us further tell the Marine Corps’ story through the museum,” remarked LtGen Robert R. Blackman, Jr., USMC (Ret), President and CEO of the Marine Corps Heritage Foundation. “The donation is a reflection of Mr. Parsons’ ongoing commitment to Marines, staying true to the statement ‘Once a Marine, Always a Marine.’”

Construction on the final phase of the museum began in March of 2015. When finished, the additional 126,000 square feet will include historical galleries that tell Marine Corps history from 1976 to the present. It will also include a 350-seat large-format theater, Hall of Valor, art studio and gallery, children’s gallery and Marine Corps Sports gallery, as well as a changing exhibits gallery. Galleries will begin opening next year, with all exhibits completed by 2020. To learn more, visit marineheritage.org.